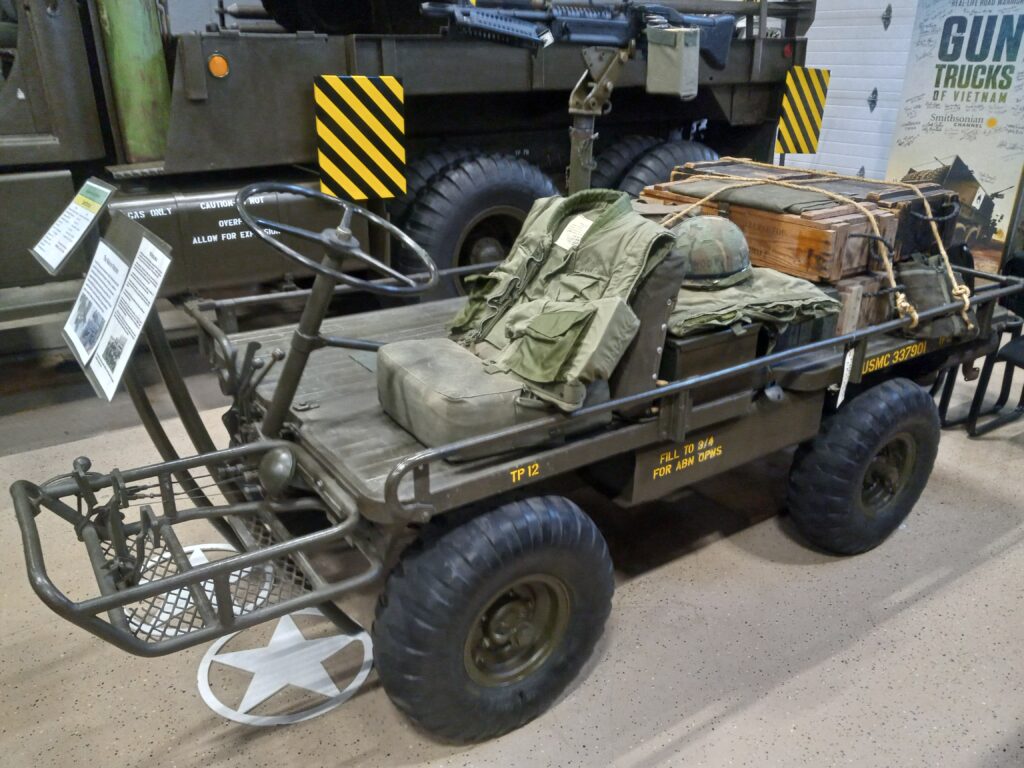 The M274 Mechanical Mule was developed to replace both the 1/4-ton and 3/4-ton 4 X 4 vehicles in infantry and airborne infantry battalions.   It needed to weigh less than 750 pounds and carry a cross-country load of 1,000 pounds plus a driver.  Willys developed a pilot model in the 1950s which could carry 850 pounds on improved roads with 2-wheel or 4-wheel drive.  The driver’s seat could be removed, and the steering column moved to accommodate more cargo. Each wheel had shackles for lifting by helicopter or dropping by parachute.  If it landed upside-down, it could be turned over and still be driven away.

The Mule’s versatility was amazing.  It could be fitted with cable reels for signal use, used as a boat for river crossing, equipped with recoilless rifles and later TOW missiles. Very popular with both the Army and Marine Corps in Vietnam, most Mules only hauled equipment and troops. Mules were designed to keep pace with foot soldiers, but by 1978 the Army determined that the M274 was simply too old to keep.  With the HMMWV (High Mobility Multi-purpose Wheeled Vehicle) taking the place of the venerable jeep, the Mule was retired from active service.

In 2000, the value of the M274 Mule was found once again in the form of the M-Gator.  The M-Gator was an off the shelf, four-wheel drive platform that serviced troops in combat as well as the M274 served thirty years before. Six varieties of Mules were made by Willys, Bowen-McLaughlin-York, Baifield Industries & Brunswick Corp.